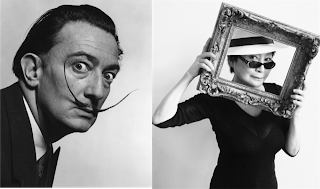 Salvador Dalí (1904-1989) sold a false hair from his mustache for US$10,000 to Yoko Ono, John Lennon's widow, says former singer Amanda Lear, the artist's lover at that time, in an interview with VSD Magazine published on Thursday. Dalí could never resist the pull of money, said Amanda Lear.

“One day he even sold a hair from his mustache to Yoko Ono. Anyway almost ... ", Lear said. Dalí thought that Yoko Ono “was a witch and was afraid that she would cast a spell on him. He sent me out to the garden to find some dried herb and put it in a pretty chest”, Lear explained. “The idiot paid US$10,000. Dalí liked to cheat people”, says Lear, who became the painter's lover in 1965, when he was 61 years old and she was 18.” He was my art teacher, my father, my lover”, says Lear when she remembers Dalí.